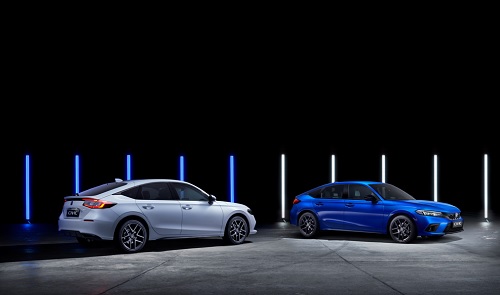 Honda has unveiled the all-new Civic e:HEV, the 11th generation of its iconic global compact car. Building on 50 years of heritage, the all-new hybrid Civic blends strong performance and efficiency with improved levels of interior comfort, visual appeal and overall usability. Featuring Honda’s proven e:HEV powertrain technology as standard, the all-new Civic completes the brand’s mission to electrify all its mainstream European models by the end of 2022.

In its latest guise, the Civic embodies a new, progressive ‘exhilarating‘ approach to design. Coupled with Honda’s ‘Man-Maximum, Machine-Minimum’ (M/M) development principle, this joint approach has shaped all aspects of the Civic’s design and development.

The all-new Civic features a sleek and sporty silhouette, which has been achieved through lowering the bonnet line 25mm over the previous generation, whilst the glass area has been increased to create a light and airy interior. To exude a refined, premium feeling, cleaner, noiseless, surfacing has been applied, with more defined belt and feature lines highlighting key details.

The lower feature line enhances the assured stature of the vehicle, as well as giving improved visibility from the rear seats. In comparison to the previous generation Civic, the base of the A-pillar has been positioned further back to align with the centre of the front wheels, this gives the car a more balanced proportion in profile as well as a wider, more assured stance from all angles. The highest point of the roofline has been placed further forward than the previous Civic, with a gentle slope to the tailgate creating a sleek, fast-back style look.

This sleeker body profile makes tyres appear larger and in combination with the wider track and tighter wheel-arch hemming, achieves a sporty, ground-hugging stance. Despite taking a new approach to aesthetics, the famed practicality and human centric thinking of the Civic family remains a key characteristic. For example, the side mirrors are now attached directly to the front doors, helping reduce unnecessary blind spots and supporting the safety of drivers and passengers.

The Civic is famed for being the do-it-all hatchback and the 11th generation is no exception, providing more space and usability than ever before. The 35mm longer wheelbase has allowed designers to create a more expansive and comfortable cabin space as well as improving dynamic performance and straight-line stability. The construction of the tailgate is now resin, a first for Civic. Developed using new manufacturing technology, the weight has been reduced by 20% compared with the previous Civic, making it easier to open and close. Additionally, the supporting hinges have been moved outwards, achieving a cleaner roofline and further contributing to the new sleeker rear design.

Once inside the Civic, the horizontal style of the dashboard emphasises the width of the cabin which, when combined with a wider field of vision gives a truly airy and open feeling. The interior also benefits from new tactile, high-quality materials throughout, including a striking metal honeycomb-pattern air vent detail running the width of the dashboard. On Advance grade the drivers’ display now features a 10.2-inch HD colour LCD panel for improved visibility.

The new Civic offers an intuitive infotainment package. The size of the central touchscreen has been increased to nine inches and has been moved upwards to minimise up-and-down eye movement. The system comes complete with wireless Apple CarPlay and Android Auto compatibility to keep occupants connected whilst on the move. 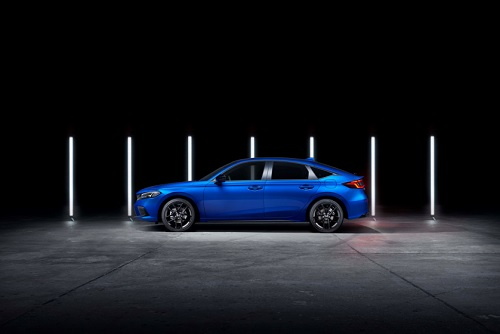 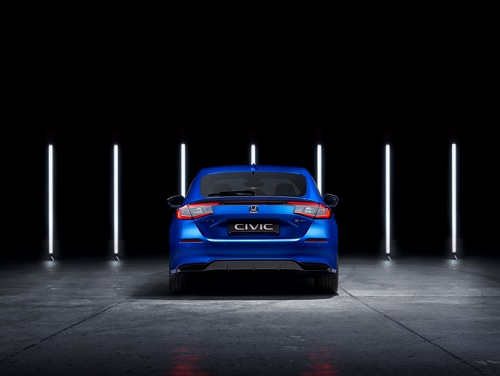 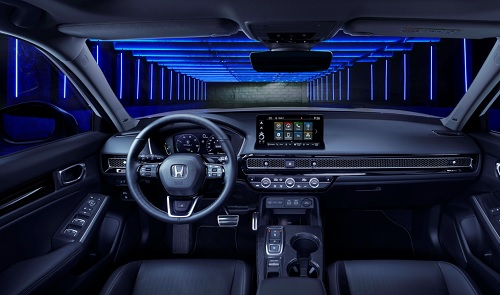 In addition, to further enhance occupant experience, the Elegance and Sport grades feature eight speakers whilst the Advance grade features 12 premium BOSE speakers for a concert like audio experience.

Honda’s proven e:HEV (hybrid electric vehicle) powertrain technology is offered as standard and its application in the Civic, sees the deployment of a new 72-cell lithium-ion battery and two compact, yet powerful electric motors paired with a newly developed 2.0-litre direct-injection, Atkinson-cycle engine. Combined, the powertrain delivers a maximum motor output of 135kW and 315Nm of torque. The latest iteration of the internal combustion engine has several new elements within its architecture to help achieve a thermal efficiency of 41%, one of the highest figures within the automotive industry for a production road car.

The two powerful electric motors work together to provide the primary drive force for the all-new Civic. The engine is controlled by a new, compact Power Control unit which now sits under the bonnet with the rest of the powertrain. Sitting under the rear seats is the latest version of our Intelligent Power Unit and whilst smaller and lighter, it benefits from an increased energy density. This system delivers a feeling of instant torque and powerful acceleration whilst still offering outstanding efficiency.

This advanced powertrain is capable of shifting seamlessly between EV, Hybrid and Engine drive with no input from the driver. Four drive modes – Eco, Normal, Sport and a new Individual mode, which allows separate control of the engine, transmission and cluster gauge display, can be selected by the driver to tailor the vehicle response as required.

Central to the e:HEV system is the fixed gear transmission, which has been designed to minimise mechanical friction and is controlled by an intelligent power control unit, which optimises the vehicle to each driving situation. The all-new Civic is targeted to achieve CO2 emissions of less than 110 grams per km which is less than 5 l/100km in WLTP testing.

Careful attention has also been paid to the drivetrain and noise management to create a tranquil, calming cabin environment, whilst enhancing the overall vehicle driveability; resulting in a smooth, linear feel during acceleration.

This refined powertrain is paired with strong, reassuring handling and straight-line stability; the cornerstones of the Civic model throughout its history. The 11th generation Civic features a 35mm longer wheelbase and wider rear track over its predecessor to help deliver improved straight-line and cornering performance, while new low friction ball joints and revised front damper enhance the dynamic feel. The new model will also be the first Civic to adopt a newly designed structure for the body stabilising front seats, providing greater stabilisation and comfort for occupants.

Available to European customers from Autumn 2022