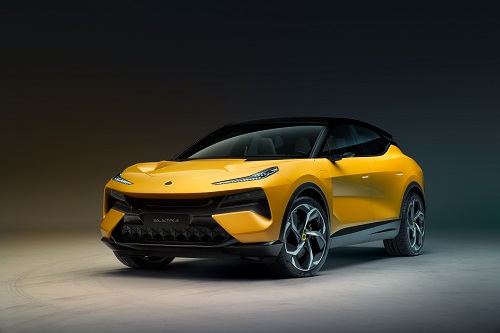 The ongoing transformation of Lotus to a truly global performance car brand has reached its most significant milestone yet.

The all-new and all-electric Lotus Eletre is a striking and progressive Hyper-SUV – the first of a new breed of pure electric SUVs. It takes the core principles and Lotus DNA from more than 70 years of sports car design and engineering, evolving them into a desirable all-new lifestyle car for the next generation of Lotus customers.

The company’s famed expertise in the fields of ride and handling, steering and optimised aerodynamics have been carefully and respectfully evolved. The Eletre takes the heart and soul of the latest Lotus sports car – the Emira – and the revolutionary aero performance of the all-electric Evija hypercar, and reinterprets them as a Hyper-SUV.

Known until two days ago only by its Lotus codename, Type 132, the Eletre is a globally relevant product, a shining halo of sustainable mobility for a worldwide audience. Embodying emotion, intelligence and prestige, it extends the reach of the Lotus name, badge and renowned driver engagement to a new audience.

A bold new dimension to the Lotus performance car portfolio, the Eletre delivers a significant number of firsts for Lotus – the first five-door production car, the first model outside sports car segments, the first lifestyle EV, the most ‘connected’ Lotus ever. And yet it remains a true Lotus, a beautiful car ‘carved by air’, packed with pioneering technology, genuine sporting performance and simplicity of purpose, designed and developed by a passionate and global team. The Lotus Eletre is alive with character and personality.

The Eletre is 4WD, has a battery capacity that’s over 100kWh and with power from 600hp. A 350kW charger will deliver a 400km (248 miles) range in just 20 minutes. The car’s target maximum WLTP driving range is c.600km (c.373 miles). It also comes with the ability as standard to accept 22kW AC charging which, where available, reduces the time plugged in.

Technology includes the most advanced active aerodynamics package on any production SUV, and intelligent driving technologies such as the world’s first deployable Light Detection and Ranging (LIDAR) system in a production car. Add in a dynamic walk-up sequence that delivers a moment of theatre every time the driver approaches the car, and it’s clear the Eletre is making a simple statement – this is Lotus reinvented, the birth of a new icon into the Lotus stable.

Matt Windle, Managing Director, Lotus Cars, commented: “The Eletre is a bold and revolutionary new car, delivering on our commitment to move Lotus into completely new automotive segments as we widen our global appeal and accessibility. This is a momentous point in our history and a clear signal of our ongoing desire to transform our business. It is a true Lotus, and we’re confident it will delight performance car customers and offer a distinct alternative to the segment’s established players. The Eletre has the soul of a Lotus and the usability of an SUV. Alongside the Emira sports car, this is the perfect two-car garage from Lotus.”

Design of the Lotus Eletre has been led by Ben Payne. His team has created a daring and dramatic new model with a cab-forward stance, long wheelbase and very short overhangs front and rear. Creative freedom comes from the absence of a petrol engine under the bonnet, while the short bonnet echoes the styling cues of Lotus’ iconic mid-engined layout. Overall, there’s a visual lightness to the car, creating the impression of a high-riding sports car rather than an SUV. The ‘carved by air’ design ethos which inspired the Evija and Emira is immediately obvious.

Ben commented: “The Eletre is a progressive all-electric performance vehicle embodying emotion, intelligence and prestige and, as the first of the brand’s lifestyle cars, it sets the standard for what will follow. We have taken the iconic design language of the Lotus sports car and successfully evolved it into an elegant and exotic Hyper-SUV.”

A signature element of the design is its ‘porosity’ – the aerodynamic principle of air flowing through the car as well as under, over and around it. Porosity was at the heart of the Evija’s design, is integral to the Emira, and has provided clear inspiration for the Eletre. It is most obvious where air is channelled under the leading edge of the car, emerging through two exit vents in the bonnet above. There are other examples of porosity ahead of and behind the front wheel arches, behind the rear wheels, and even at the top of the D-pillar. For the driver there are clear benefits to porosity – less resistance in cutting through the air, delivering a more efficient journey in terms of improved vehicle range, speed and performance. 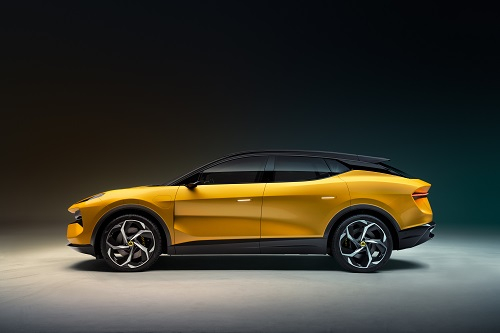 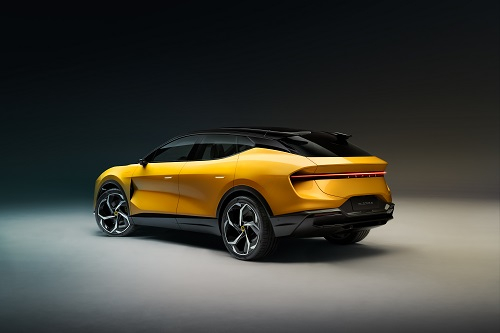 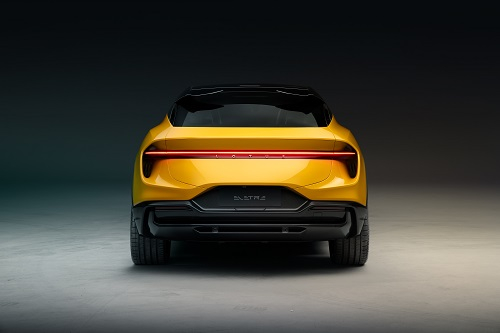 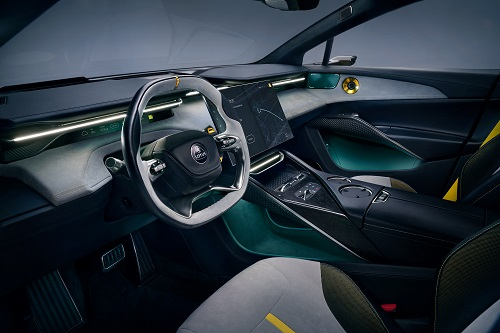 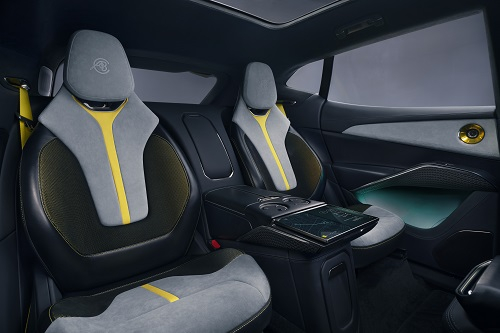 At the front of the Eletre, the very sharp and crisp leading edge reveals a clear lineage with the Emira and Evija. It draws a distinct line across the very striking and contemporary design treatment below. There are further echoes of Evija in the layering of the surfaces, the creation of space and the optimised aerodynamic performance.

Just above the leading edge are the very slim and technical light clusters which house the Daytime Running Lights and scrolling directional indicators. The main lamps, which are available with matrix technology to permit constant high beam use without affecting oncoming traffic, are housed below, recessed and partially hidden.

Lower down is the Eletre’s active front grille, a network of interconnecting triangular petals that dominate the central section. Intricately designed, they remain closed when the car is at rest or when there’s a need to reduce drag during driving. They open in a distinctive pattern to feed air into the radiator, allowing the Eletre to ‘breathe’ when cooling of the electric motors, battery pack and front brakes is required. It’s a further example of the car’s porosity and also offers aerodynamic benefits.

Overall there is a unique sense of flow and a kinetic quality to the Eletre’s front end, which also includes a deployable LIDAR sensor mounted at the top of the windscreen. All the black components are finished in carbon fibre while the body panels are aluminium. It is the bold leading edge of the Eletre’s bonnet which continues round into the front wing, wheel arch and ultimately the length of the vehicle as a feature line. The car’s taut and muscular lines are dominant above it, while the aerodynamic elements are below.

Moving round the car, its muscular haunches dominate the profile view. The air outlet immediately behind the front wheels defines the sculpted shape of the doors, each of which has a flush handle. The electrically opening cover for the charging port is fitted in the front wing, as are the deployable LIDAR sensors, one on each side and a world-first technology for the Eletre.

The aggressive rake of the windscreen is clearly visible in profile, with a relatively narrow, glass area – and black cantrail above – which tapers away dramatically at the rear. That leads into a unique floating D-pillar, engraved with the Eletre wordmark and featuring an innovative ‘air blade’ which aids drag reduction. Another example of porosity, it’s an aerodynamic performance enhancement taken directly from the front bumper of the Emira.

Each door mirror is replaced by an Electric Reverse Mirror Display (ERMD), which houses three different cameras1 – one for the rear-view mirror, a second to help create a 360-degree view of the car from above to aid parking, and a third that’s part of the intelligent driving technologies. It works in tandem with the Eletre’s LIDAR system to deliver autonomous driving capability. The car rides on 23-inch machine-cut split-finish five-spoke alloys with carbon fibre inserts to aid air flow and ceramic composite 10-piston caliper brakes2.

Moving to the rear, the full-width ribbon light strip picks up the feature line from the profile. Situated just above the Lotus wordmark, it is red when the car is moving and includes a scrolling directional indicator at each end, where it curves gently into the air outlets from the wheel arches – another design cue which echoes both the Emira and Evija. The light can appear in four colours, playing a role in the car’s theatrical unlocking sequence and indicating battery charge status.

The rear is dominated by the unique cantilevered carbon fibre ‘floating’ split roof spoiler, a motorsport-inspired design feature that evokes race car winglets. With the central section removed weight is saved – a very Lotus concept – and allows the LIDAR sensor to be integrated at the top of the glass. Optimised for exceptional aerodynamics, the roof spoiler channels airflow down the glass and into the active tailgate spoiler which is deployed automatically at speed. It has three distinct deployment angles, depending on the drive mode selected.

The Eletre takes Lotus interiors to an unprecedented new level. The performance-oriented and technical design is visually lightweight, using ultra-premium materials to deliver an exceptional customer experience. Shown with four individual seats, this is available to customers alongside the more traditional five-seat layout. Above, a fixed panoramic glass sunroof3 adds to the bright and spacious feeling inside.

Sustainability has been a core focus of the design team, which has worked with leading supplier Kvadrat on material choices. The interior uses premium feel and highly durable man-made microfibres on the primary touchpoints, and an advanced wool-blend fabric on the seats. It is 50% lighter than traditional leather, allowing for further weight savings. The hard materials are carbon fibre, though rather than use the traditional ‘weave’ most often associated with automotive design, Lotus has recycled the fibres trimmed from the edge of the weave. These have been reconstructed into a new matting, then compressed in a resin to create the car’s premium marble-like finish.

The driver-focused cockpit and high centre console are inspired by the Lotus Emira and Evija, creating a cossetted feeling. The layering of materials and textures creates a truly premium feel, augmented by a triangular theme – seen externally on the car’s active front grille – replicated in multiple locations around the cabin.

The Lotus philosophy of light-weighting – removing material if it’s not needed – is clearly illustrated in the instrument panel. The floating wing’s central section has been taken out, echoing the design of the rear spoiler.

There is a wealth of practical storage space in the Eletre’s cabin. The centre console includes a storage tray with wireless charging for mobile phones, as well as twin cupholders of different sizes which sit flush to the surface until they’re needed. The beautifully sculpted door design includes storage that will take a litre bottle.

The smart design is continued in the rear of the car, with space in the doors and between the two chairs. There is a central draw at knee height and the armrest splits behind the two cupholders. It ends in an angled nine-inch touch-screen for infotainment, with a wireless charging tray beneath.

The platform will be the basis for an all-new range of premium lifestyle performance electric vehicles from Lotus. Led by the Eletre, these cars will catapult Lotus into a new era of higher retail volumes and significant revenues.

The Lotus Eletre is on sale now across global markets, with first customer deliveries in 2023 starting in China, the UK and Europe.