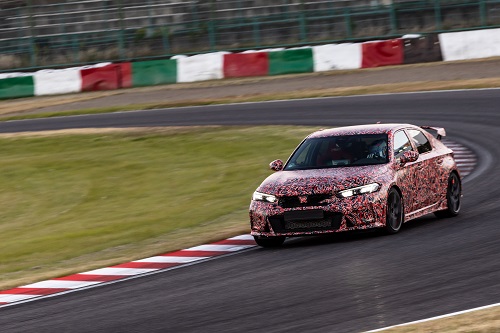 Honda’s next-generation Civic Type R has set a new lap record for a front-wheel drive car at the world-famous Suzuka Circuit in Japan. It lapped the 5.8km track in 2 minutes 23.120 seconds*, 0.873 seconds faster than its predecessor, the stripped back 2021 Honda Civic Type R Limited Edition.

The new benchmark time was set during the new model’s final development evaluation on 15 March 2022. The all-new Civic Type R is the latest performance vehicle to prove itself on the iconic Suzuka International Racing Course, famous for its high-speed chicanes and challenging corners.  The track, often described as one of the world’s greatest circuits, has been a test bed for performance Hondas since 1962 and has been home to the Japanese Formula 1 Grand Prix for all but two years since 1987.

Further information about the all-new Civic Type R will be shared ahead of its launch later in 2022.