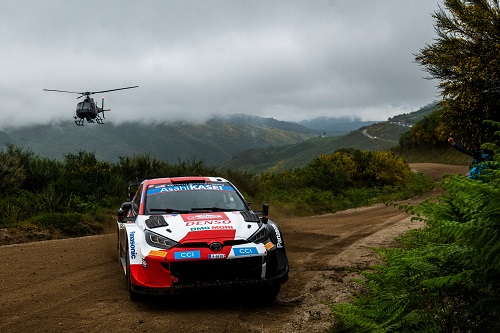 Kalle Rovanperä claimed his third FIA World Rally Championship victory in as many events in Portugal on Sunday afternoon to open a commanding lead in the points standings.

The Finn trailed long-time leader and Toyota GR Yaris team-mate Elfyn Evans for the first two days at Vodafone Rally de Portugal before relegating the Welshman on Saturday evening. He extended a slender advantage on the short final leg to win by 15.2sec.

Rovanperä’s triumph on the first gravel fixture of the season followed success on Sweden’s snow and ice and Croatia’s asphalt. He holds a 46-point championship advantage after four of 13 rounds.

Victory looked near-impossible for Rovanperä who started Friday’s opening leg first in the order. He cleaned the sandy roads to leave more grip for those following, but the 21-year-old avoided trouble on the punishing rock-strewn roads before pouncing on Evans.

Maximum bonus points for winning the final Wolf Power Stage over the legendary Fafe speed test was the icing on the cake.

“At the moment it seems we are on a really good drive,” he smiled. “Starting first here and to fight for the win like this, it was really nice. We saw a lot of issues and tough conditions this weekend and our car was perfect as always so everybody can be really happy.”

Second was the best result of the season for Evans, who won six of the 21 speed tests compared to Rovanperä’s eight. It marked a return to form for the man who has finished championship runner-up for the last two seasons after a torrid start to the year.

“We definitely needed a result, that’s for sure,” he admitted. “Of course, we’re disappointed with the outcome of today, but I take my hat off to Kalle. From my side it’s nice to be back on the podium and we should be able to build from here.”
Toyota Gazoo Racing was on course to lockout the podium with Takamoto Katsuta holding third ahead of the final stage. But a fast-closing Dani Sordo, making his first appearance of the season in a Hyundai i20 N, moved ahead in the final kilometres by 2.1sec.

Thierry Neuville fell away from the victory fight on Friday when a front wheel fell off his i20 N on a liaison section. He drove the final two stages with just two-wheel drive and plunged from second to seventh. He recovered to take fifth, 18.4sec behind Katsuta.

Brake problems cost Craig Breen sixth. The Irishman conceded two places on the final day in his Ford Puma, allowing Ott Tänak into sixth in an i20. The Estonian steadily gained ground after two Friday punctures ended his challenge.

Competitors face more hot weather and rough roads as the WRC moves to the Mediterranean island of Sardinia next month. Rally Italia Sardegna is based in Alghero on 2 – 5 June.