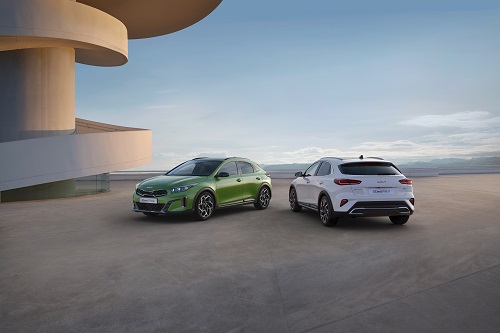 The new XCeed integrates a number of design changes alongside a competitive powertrain line-up that includes mild hybrid, plug-in hybrid, petrol and diesel versions. Both the exterior and interior have been enhanced to better match the sporty urban nature of the XCeed and make it an even more distinctive member of the wider Ceed model family.

The inclusion of a sporty, GT-line specification for the first time, combined with a petrol engine that produces 204ps, offers an exciting and dynamic driving experience. This dedicated sporty model captures the imagination and evokes an emotional reaction by appealing to customers who want the rational benefits of a larger vehicle without compromising on their sense of style or sportiness. A standout model in the XCeed range, the GT-line defies expectations with its unique sporty design and GT-inspired performance.

As one of the most high-tech cars in its class, the new XCeed is a flagship model for Kia thanks to its latest technologies including advanced safety, connectivity and infotainment systems. Designed to improve everyday usability, enjoyment and occupant safety, these updates continue the XCeed’s legacy as a technology leader within the C-Crossover segment.

As a sustainable mobility solutions provider, Kia introduces the new XCeed with a wide range of efficient and electrified powertrain options. The XCeed Plug-in Hybrid (PHEV) delivers an all electric range of 48km, equivalent to 60 km of city driving, while other fuel-efficient powertrains are also available, from fast-revving, turbocharged engines to innovative mild-hybrid systems, ensuring the XCeed is equipped for every modern lifestyle.

Stylish, expressive and modern in appearance, the new Kia XCeed builds upon its predecessor’s iconic design. A product of the brand’s European design centre in Frankfurt, Germany, the XCeed’s updated design has been crafted under the direction of Gregory Guillaume, Vice President of Design for Kia Europe.

Guillaume commented: “The XCeed is our most popular model within the Ceed range and it was important that we took this opportunity to further refine its styling and progress the Ceed design language. The changes we have made further highlight the sporty, urban and adventurous nature of the XCeed.”

The new Kia XCeed features new LED headlamps and a revised grille, front bumper and innovative air intake design. By creatively integrating the fog lamps into the headlights, the designers were able to include air curtains on either side which guide air smoothly around the vehicle’s wheels to reduce drag and improve fuel efficiency.

The new XCeed rides on dedicated 18-inch alloys designed specifically for CUV-segment appeal. At the rear, targeted refinements include a new diffuser with a gloss black skid plate and a discreet ‘exhaust-look’ design for a refreshed sporty look across the XCeed range. In profile, the XCeed’s relatively long bonnet flows into the A-pillars aft of the front wheels, lending the car a sporty, swept-back silhouette. While the wheelbase remains the same as other models in the Ceed line-up at 2,650mm, the XCeed’s front and rear overhangs have been extended over the five-door hatchback by 25mm at the front (to 905mm) and 60mm at the rear (to 840mm). The only body panels carried over from its five-door hatchback sibling are the front doors.

A fast sloping roofline that leads to the steeply-angled fastback tailgate enhances the XCeed’s dynamic, coupé-like appearance. It sits on a choice of 16- or 18-inch machined aluminium alloy wheels shod with high-grip 205/60 R16 or 235/45 R18 tyres. 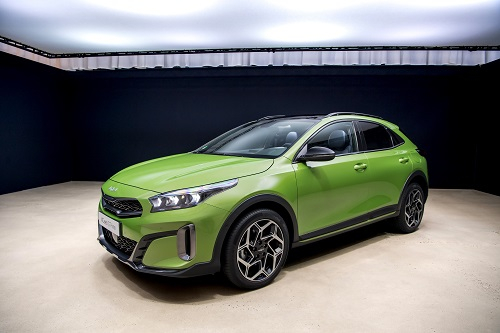 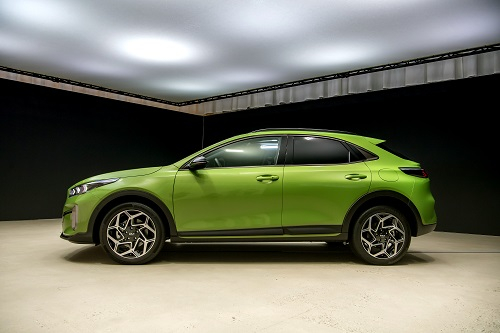 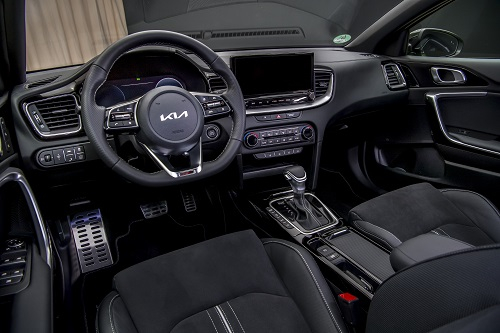 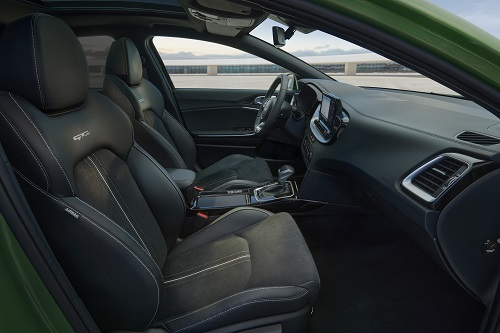 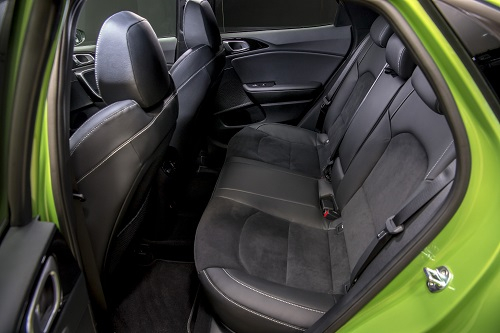 At the rear, LED tail-lights emit a slim, highly-technical light signature which, when viewed from certain angles, appears to spear forward into the shoulders of the car. The heavily-creased lines running horizontally across the tailgate and rear bumper give the new XCeed a wider, more stable posture.

The XCeed’s elevated ride height and sculpted body present a robust image that consistently attracts buyers to Kia’s product portfolio. The XCeed’s ground clearance is 172mm on 16-inch wheels and 184mm on 18-inch wheels, a rise of up to 44mm over the Ceed five-door hatchback. Wheel arch and side sill cladding, along with satin chrome roof rails, lend the car a tough presence.

With the introduction of the GT-line, Kia brings sporting appeal to the XCeed, stirring an evocative visual and driving experience by elevating this popular model to a whole new level. It speaks directly to those customers who balance their heart and head; choosing a practical, spacious, safe family vehicle with eye-catching design and incredible performance.

The GT-line has been introduced across the Kia line-up over recent years to boost performance and the emotional connection to movement that is inherent in Kia’s DNA. The addition of GT-line to XCeed is an exciting new development for one of the brand’s most popular model families.

The new GT-line specification features a series of sporting touches that differentiate it from the baseline model. An edgy tiger nose design frames the new front grille, while a sporty lower air intake and side bumper cladding adds a more aggressive look to the front end. Air curtains finished in dark chrome help to feed air through the front of the car to reduce drag and enhance aerodynamic efficiency. At the rear, striking new hexagonal shaped LED tail-lights and a sporty body-coloured lower diffuser complete the revamped model and separate the XCeed GT-line from anything else on the street.

Inside, the new Kia XCeed’s sculptured centre console is oriented slightly towards the driver. With a commanding seat position and raised ground clearance over a conventional hatchback, the Kia XCeed provides drivers with a sportier driving position while also allowing for a better view of the road ahead.

A ‘floating’ touchscreen infotainment system stands apart from the dashboard, while the lower portion of the instrument panel provides a set of touch-sensitive buttons, dials and switches to control audio volume, heating and ventilation. Highly ergonomic in layout and functionality, these controls have been redesigned to improve interaction and enable drivers to make quick changes to the cabin environment without taking their eyes off the road.

The new Kia XCeed comes with engaging new graphic themes for the 12.3-inch Supervision digital instrument cluster, the designs of which can be linked to the vehicle’s Drive Modes, while a gloss black transmission panel and a new thin bezel-edged rear-view mirror improve both form and function.

The interior is finished in sophisticated soft-touch materials throughout, with a satin chrome dashboard trim presenting a refined, upscale ambience. Buyers can choose from a range of cloth, suede, synthetic leather or genuine leather upholstery finishes for the seats.

The interior also receives a GT-line treatment, with a host of improvements to match the sporting feel of the exterior including a motorsport-inspired ‘D-cut’ steering wheel, black headliner, a gear knob wrapped in perforated leather and a special GT-line seat design.

The new Kia XCeed is designed to achieve the cabin and storage space of a larger model in a sportier body with a more compact footprint. Sitting directly between the Ceed five-door hatchback and the Kia Sportage, the Kia XCeed still manages to provide comparable interior space and luggage capacity to Europe’s best-selling larger models.

With a total length of 4,395mm, the new Kia XCeed is 85mm longer than the Ceed five-door hatchback and 120mm more compact than the Sportage. Its maximum roof height of 1,495mm also means it stands 48mm above the Ceed and 155mm below the Sportage, providing drivers with a lower centre of gravity than its taller sibling.

The new Kia XCeed offers generous interior space for front and rear occupants. With the hip point for each seat raised by up to 44mm over that of the Ceed hatchback, drivers are provided an elevated driving position in addition to easier ingress and egress. A half-moon-shaped glass area and fastback roofline provide rear passengers with a brighter, airier ambience and more headroom than other rivals in the compact crossover class.

Luggage capacity for the new Kia XCeed is rated at 426 litres (VDA) and with the rear seats folded, luggage capacity grows to 1,378 litres. Versatility is also assured thanks to 40:20:40 split-folding rear seats, a Smart Power Tailgate with height adjustment, and a two-step boot floor that can be moved up or down to provide either more space or a hidden underfloor storage compartment. This higher boot floor also improves ergonomics when moving luggage in or out of the vehicle.

The new Kia XCeed is powered by a range of fast-revving, turbocharged petrol engines, the majority of which feature mild-hybrid technology, while an advanced plug-in hybrid powertrain enables drivers to benefit from extensive emissions-free mobility.

Ideal for those who regularly cover long distances, the new XCeed is also available with a frugal diesel mild-hybrid electric vehicle (MHEV) powertrain. This 1.6-litre diesel engine can be paired with a six-speed manual transmission to deliver 136 ps and 280 Nm of torque, or 320 Nm with the seven-speed dual-clutch version.

The MHEV system supplements the engine’s torque output with power from a compact 48-volt lithium-ion polymer battery that is now available across the entire model family. The roll-out of new mild-hybrid powertrain technology across the updated XCeed range reduces CO2 emissions by up to 10 per cent (NEDC 2.0, combined cycle), depending on body style, choice of transmission, engine power output and vehicle specification. Importantly, while the adoption of MHEV technology improves fuel efficiency, engine performance remains the same as before.

Instead of a hydraulic control, the XCeed is fitted with the brand’s intelligent Manual Transmission (iMT) which operates purely electronically and is integrated seamlessly with the EcoDynamics+ powertrain. The iMT system works with the Mild-Hybrid Starter-Generator (MHSG) to switch off the engine when the vehicle is coasting to a halt. In the XCeed’s default ‘Eco’ drive mode, it also enables brief periods of ‘engine-off’ coasting at speeds of up to 125 km/h (77 mph), seamlessly reactivating when the driver pushes the accelerator, brake or clutch pedal. The system contributes to the MHEV’s overall fuel efficiency improvements and reduces CO2 emissions by around three percent in real-world driving conditions.

A highly efficient plug-in hybrid (PHEV) powertrain option is once again available in the new XCeed, combining an 8.9 kWh lithium-polymer battery pack, a 44.5 kW electric motor, and an efficient 1.6-litre ‘Kappa’ four-cylinder GDI engine. Paired with a six-speed dual-clutch transmission (6DCT), the PHEV transmits up to 141 ps and 265 Nm to the front wheels, while drivers will also benefit from an all-electric range of 48km, equating to 60km of city driving. This will enable drivers to complete the majority of daily drives and short commutes solely on electric power.

UK specification, technical information and pricing will be confirmed closer to the on-sale date.