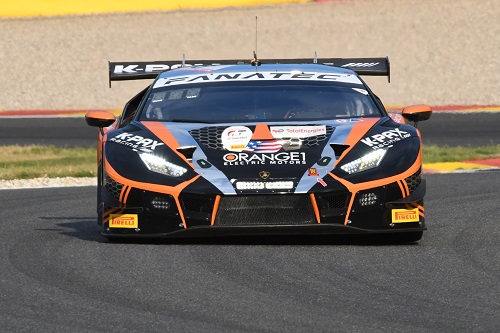 Andrea Caldarelli surged to a momentous Super Pole at Spa-Francorchamps to give Lamborghini and Orange1 K-PAX Racing the best possible starting spot for the 74th TotalEnergies 24 Hours of Spa.

This represents the first-ever pole position for Lamborghini at the Belgian endurance classic, as well as the first for a team from the United States. What’s more, with a time of 2m16.221s Caldarelli now holds the record for the fastest qualifying lap of the race’s GT3 era.

Andrea Caldarelli, #6 Orange1 K-PAX Racing Lamborghini: “Conditions were very different than during qualifying, which was run when it was almost dark. It was like a completely different track, so I took it easy during the first lap to fully understand the grip levels. Then I attacked on my second lap; I knew there was still something out there. Having a lap without any traffic feels amazing! I am really happy to take the first pole for Lamborghini. We have always been very close. It’s still a 24-hour race, but it’s good to start from P1. I think this pole position really goes to all the guys in America and in Sant’Agata. It was a team effort from both sides and it definitely goes to them.”

The Italian was the 17th of 20 drivers to run in the deciding session, placing him among the favourites to secure top spot. But to do so he first had to beat the man who has secured Super Pole at the previous two editions, Mercedes-AMG ace Raffaele Marciello, who delivered a brilliant lap at the wheel of the #88 AMG Team Akkodis ASP.

Marciello ran 12th and lost his first flying lap for exceeding track limits. The second effort began solidly, while a monster middle sector was enough to vault the Swiss driver to the head of the order when he took the chequered flag. With a time of 2m16.375s, Marciello was back on top.

The following five cars could not topple the #88 Mercedes-AMG, while Caldarelli also came up short on his opening lap. The Italian’s second attempt looked strong, but pole seemed to be out of reach. However a remarkably consistent lap gave Caldarelli the crucial edge and he crossed the line with a 2m16.221s. Pole was within touching distance.

There was still the small matter of the Iron Lynx Ferrari squad, which finished one-two in last night’s qualifying to earn the best running spots for Super Pole. But when the moment arrived the Ferrari challenge wilted, with neither the #51 of Nicklas Nielsen nor the #71 of Antonio Fuoco able to beat Caldarelli. Indeed, neither car was among the top-10 at the end of the session.

Klaus Bachler will start from third in the #54 Dinamic Motorsport Porsche. As is so often the case, this car flew under the radar only to score a superb result. The Austrian posted a 2m16.446s, just two tenths short of Caldarelli’s pole time. He will share the second row with Luca Stolz (#2 AMG Team GetSpeed Mercedes-AMG), who like Marciello enjoyed a much better run in Super Pole than yesterday’s qualifying.

Mirko Bortolotti (#63 Emil Frey Racing Lamborghini) and Kevin Estre (#221 GPX Martini Racing Porsche) will form an all-star third row of the grid, both drivers having made good progress from their running slots. Mattia Drudi was the best of the Audi contingent, qualifying the #12 Team Tresor entry seventh in a quiet session for the Ingolstadt brand. 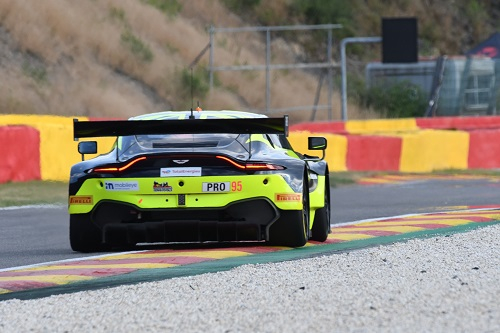 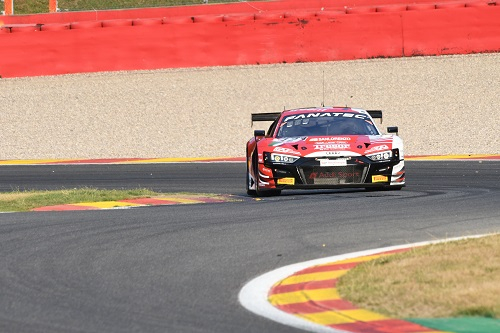 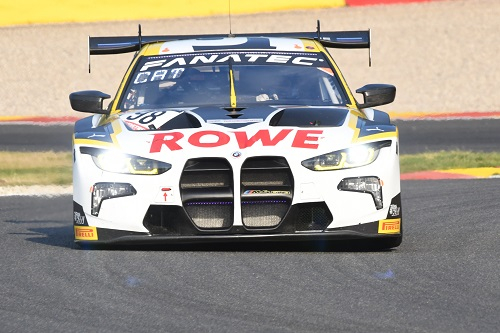 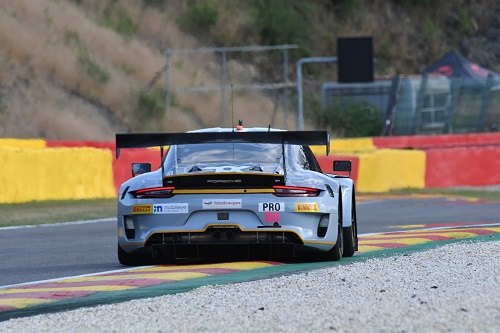 The Ferrari runners could only manage 11th and 13th for the #71 and #51 cars respectively, though it is worth noting that the Iron Lynx squad won from P13 last year. Two more brands were represented in Super Pole, with Nick Catsburg (#98 ROWE Racing BMW) and Maxime Martin (#95 Beechdean AMR Aston Martin) taking 16th and 17th respectively.

Silver Cup pole was also settled during the session after three cars progressed to the deciding shootout via last night’s qualifying. Running first, Fabian Schiller delivered a very impressive performance at the wheel of the #777 Al Manar Racing by HRT Mercedes-AMG to secure ninth overall, beating several big names in the process.

Schiller posted a 2m16.774s, beating the #30 Team WRT Audi of Thomas Neubauer by more than half a second. He could feasibly have gone quicker, but an error on his second lap prevented the German from improving. Konsta Lappalainen completed the Silver Cup trio, rounding out the top-20 in his #14 Emil Frey Racing Lamborghini.

Last year’s overall winner was in dominant form, with the #71 crew of Fuoco/Serra/Rigon beating the #51 of Molina/Calado/Nielsen by 0.178s on average times. The chief architect of this success was Antonio Fuoco, who delivered a 2m16.486s in Q2 to establish a new GT3 era qualifying record.

From this point onwards the #71 Ferrari was clear at the head of the order and secured safe passage thanks to strong runs from Daniel Serra and Davide Rigon. The sister car vaulted into second spot during the fourth and final qualifying segment to complete a perfect day’s work from the Italian squad.

The Iron Lynx cars were followed by the #6 Orange1 K-PAX Racing Lamborghini of Pepper/Caldarelli/Mapelli, who came up 0.317s short on the average. Audi Sport was also on song as its #12 Team Tresor and #32 Team WRT entries took fourth and fifth respectively.

BMW will have a car in the shootout thanks to the #98 ROWE Racing machine, while a third Audi Sport entry also eased into Super Pole thanks to the #66 Team Attempto car. A trio of factory Mercedes-AMG entries completed the top-10, with the #2 GetSpeed finishing ahead of the #88 Akkodis ASP and #55 GruppeM Racing squads respectively.

A further 10 cars will compete in Super Pole. Dinamic Motorsport, Toksport WRT and GPX Martini Racing will represent Porsche, while Emil Frey Racing had all three of its Lamborghini entries among the top-20. Beechdean AMR put Aston Martin in the fight with its #95 Vantage and ensured that seven brands will contest Super Pole. Audi Sport Team Saintéloc, the #30 Team WRT Audi and the #777 Al Manar Racing by HRT Mercedes-AMG also reached tomorrow’s session.

Among those to miss out on Super Pole were the #74 EMA Porsche (22nd), the #46 Audi Sport Team WRT (25th) and the #38 JOTA McLaren (28th). But the biggest upset concerned the #47 KCMG Porsche shared Laurens Vanthoor, Dennis Olsen and Nick Tandy. The latter suffered a brake problem on his first lap in Q3 and was unable to set a time, consigning this extremely strong crew to 64th on the grid.

There were three Silver Cup cars among the top-20, ensuring that the battle for class pole will be decided tomorrow night. The best of them was the #14 Emil Frey Racing Lamborghini of White/Tujala/Lappalainen, which edged the #30 Team WRT crew by 0.019s on the average. The #777 Mercedes-AMG made it through in 20th spot, its place secured by a superb Q4 effort from Fabian Schiller.

Three class pole positions were decided during Qualifying. Barwell Motorsport is the very first Gold Cup pole-sitter after its #77 Lamborghini of Al Harthy/De Haan/MacDowall/Mitchell qualified 29th overall. It was close, however, with a blistering Q4 lap from Lucas Auer putting the #57 Winward Racing Mercedes-AMG firmly in contention. The Austrian’s 2m16.491s was second only to record-breaker Fuoco in the entire qualifying process.

AF Corse will start from Pro-Am pole after its #52 Ferrari qualified 41st on the grid. The crew of Machiels/Costantini/Bertolini/Rovera beat the #24 Herberth Motorsport Porsche by half a second and will start eight places clear of its nearest class rival. SPS automotive performance took first blood in the Bronze Cup battle as its #20 Mercedes-AMG of Kurtz/Pierburg/Müller/Juffali banked 59th overall.

Qualifying was punctuated by two red flags. The first occurred halfway through Q2 when Ralf Bohn went off in the #911 Herberth Motorsport Porsche, ending the German squad’s effort early. No one had set a flying lap when Q3 was stopped by Tyler Cooke crashing the #27 Leipert Motorsport Lamborghini at Raidillon, though the car was not severely damaged and the driver climbed out unaided.   By Melissa Warren