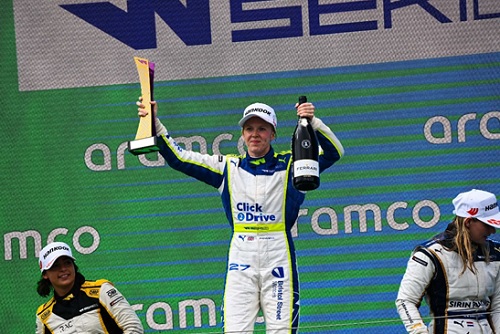 A day after securing her first pole position of the season, Alice controlled the race from the front and expertly negotiated two safety car restarts to win the fifth W Series race of her career. Despite seeing her perfect start to the season and seven-race winning streak come to an end, Jamie’s second-place finish extended her run of W Series podium finishes to 13, and stretched her lead at the top of the championship to 75 points.

Alice’s victory – her first since September last year when she won at Circuit Zandvoort, Netherlands – moved her up to second in the standings, level on points with Beitske Visser (Sirin Racing W Series Team, 27, NED) who finished third for her second podium of the season.

Fabienne Wohlwend (CortDAO Racing W Series Team, 24, LIE) scored points for the fourth straight race in sixth place. She was followed by Sarah Moore (Scuderia W, 28, UK) and Abbie Eaton (Scuderia W, 30, UK), although the team-mates were being investigated after the race for overtaking under the safety car. Juju Noda (W Series Academy, 16, JPN) and Bruna Tomaselli (Racing X, 24, BRA) completed the top 10, the former scoring the first points of her W Series career in ninth.

Heavy rain fell throughout the morning and, although it had stopped by the 14:40 CEST start time, the track surface remained damp and Saturday’s race of 30 minutes plus one lap began behind the safety car.

All of the drivers started on slick tyres and, as they struggled to find grip on the first lap behind the safety car, Nerea Martí (Quantfury W Series Team, 20, ESP) spun at Turn 10 and collided with a marker board before regaining control and returning to the track.

The safety car pulled into the pit-lane with 25 minutes left on the clock, and pole-sitter Alice retained her lead from Beitske at the opening corner. Marta followed the leading pair having been promoted on the formation lap due to Nerea’s error.

Jamie overtook Nerea for fourth at Turn 3, and Abbi followed her past the Spaniard, who made contact with Belen García (Quantfury W Series Team, 22, ESP) two corners later, relegating the team-mates out of the top 10. That incident was being investigated after the race in support of the Formula 1® Aramco Magyar Nagydíj 2022.

Alice was under pressure from Beitske at the start of the next lap but managed to retain a slender lead of less than half a second. Jamie moved into the top three with a third of the race remaining when she overtook Marta and, now in clear air, she started chasing the leading pair and set three consecutive fastest laps to close to within a second of leader Alice at the halfway stage.

Jessica Hawkins (Click2Drive Bristol Street Motors Racing W Series Team, 27, UK) had progressed from 10th on the grid to sixth before contact with Emma Kimiläinen (Puma W Series Team, 33, FIN) at Turn 1 dropped her out of the points and caused the latter’s retirement. Shortly afterwards, the yellow flags were waving in sector two where Bianca Bustamante (W Series Academy, 17, PHI) spun into the barriers at Turn 9 before limping back to the entry of the pit-lane where she stopped due to the damage caused. 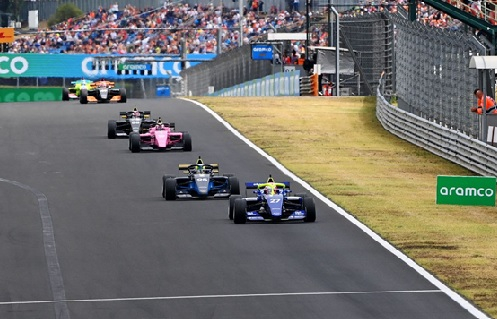 Up ahead, Jamie went later on the brakes than Beitske at Turn 1 before pulling off the overtake for second place on the inside and making the move stick through Turns 2 and 3. Alice and Jamie traded fastest laps to be separated by one second as the race moved into the final 10 minutes, when the safety car came back out to allow Bianca’s car to be recovered.

There were less than five minutes to go when the safety car period ended. Alice put the hammer down early and that gave her a lead of half a second over Jamie as the drivers crossed the line. Jamie had halved that advantage midway through the following lap, but ran wide at Turn 11 to allow Alice to regain a lead of half a second.

Alice had extended that by two tenths as they began the last lap of the race, and kept her cool on the final circuit of 4.381km and 14 corners to take a deserved victory.