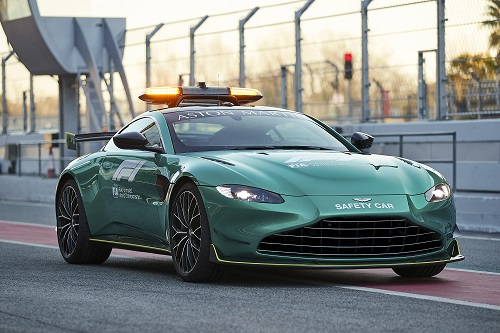 British ultra-luxury car brand, Aston Martin, will continue to supply Official Safety and Medical cars to the FIA Formula One® World Championship during the upcoming 2022 season. As F1® prepares for the start of a new era with bold, new technical regulations, Aston Martin is putting the final touches to the Vantage Safety Car and DBX Medical Car.

The Aston Martin cars will support 12 of this year’s F1® races, starting with the long-awaited return of Formula 1® to Albert Park in Melbourne. Both the specially prepared Vantage and DBX will run in the new 2022 Aston Martin Racing Green that was showcased at the launch of the Aston Martin Aramco Cognizant Formula OneTM Team’s challenger, the AMR22 on 10 February.

The Aston Martin Vantage Safety Car of 2021 inspired the Vantage F1® Edition, the fastest, most track-focused Vantage to date and the ultimate expression of performance and dynamism.

Driven by the FIA’s appointed driver, the vastly experienced Bernd Mayländer, the Official F1® Safety Car Vantage is one-of-a-kind, developed purely for this role by the engineering team at Aston Martin’s Headquarters in Gaydon, UK, in collaboration with the FIA, the governing body of world motorsport.

Using the learning from the Vantages that compete in GT competition across the globe, including the 24 Hours of Le Mans, the Vantage Safety Car has been adapted for the ultimate speed and handling to perform its important role in F1®. An additional FIA safety car livery, bodyside mounted radio antennas, an LED rear number plate and a bespoke, roof-mounted LED light-bar, developed by Aston Martin, mark it out as the leader of the pack.

Inside the Vantage, the driver and passenger have access to the FIA’s Marshalling System, which displays lights corresponding to any warning flags being shown, just as inside the F1® cars themselves, and the car is well covered by cameras inside and out to provide live TV footage.

The DBX Medical Car enjoys an output of 550PS and 700NM of torque which launches DBX from 0 to 62mph in just 4.5 seconds, reaching a top speed of 181mph, which will bring Dr Ian Roberts, the FIA Medical Rescue Coordinator, to the scene of an accident as quickly as possible.

Having the Aston Martin DBX deployed on the best race circuits in the world provides invaluable data for the vehicle dynamics experts at Aston Martin. Information gathered during F1® race weekends has enhanced the evolution of the new DBX 707, the world’s fastest luxury SUV.

Similarly, the Aston Martin DBX Official Medical car has been uniquely modified to be on a race track at the same time of some of the fastest cars in the world. The Medical car has to carry a lot of equipment, from fire extinguishers to a defibrillator and a large medical kit bag and the DBX provides more than ample boot space for this. Like the Vantage, the DBX has been fitted with FIA-approved racing seats equipped with a 6-point safety harness, the marshalling system and even TV screens so the Doctor can see exactly what is happening in the race as he sits, ready to go in the pit lane.

Tobias Moers, Chief Executive Officer of Aston Martin Lagonda said “It is a continuing source of pride for myself and the whole company to see our cars playing a crucial role in Formula 1. Vantage and DBX will feature at 12 Grand Prix this year and, as much as I hope they won’t be called upon too often in the races, I think we all know they will be busy again as F1 enters this new era. We’re excited to be part of the show!”