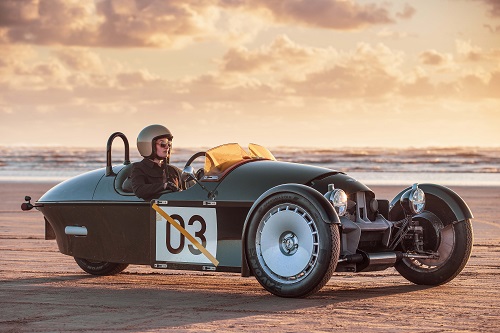 The Morgan Motor Company today unveils Super 3, one of the most intriguing and distinctive vehicles the company has ever built. Super 3 has been designed from the ground up to offer new levels of character, thrill and adventure, principles that have defined Morgan’s three-wheeled product since the company was founded 113 years ago.

At the very heart of Super 3’s personality is its driving character. Primarily, a three-wheeled Morgan is a vehicle that entices you to get behind the wheel, offering a unique combination of mechanical feel, connection to the environment and visual differentiation from anything else on the road. Few vehicles will engage their occupants like Super 3, which encourages owners to feel present in the craft of motoring and entices them to embark on incredible adventures.

As the company’s most configurable model to date, Super 3 offers an extensive list of options and accessories that allow owners to tailor their own experience. From adventure touring accessories to race-inspired liveries, Super 3 adopts multiple personalities to reflect the individuality of its owner. Three expressions of these personalities can be seen on the launch vehicles.

Like every Morgan, Super 3 will be built in Malvern, Worcestershire, at the company’s Pickersleigh Road factory. Skilled craftsmen and women have been handcrafting cars in these hallowed red brick buildings since 1914, just five years after HFS Morgan invented the first Morgan, known as ‘The Runabout’.

With Super 3, Morgan introduces a new design philosophy. In comparison with the outgoing 3 Wheeler, which was created in the style of the 1920s V-twin-engined three-wheelers, Super 3’s designers and engineers have drawn influences from the mid to late century. The jet age was an era in which there was a logical relationship between function and form, as the horizons of imagination were broadened.

Aerodynamic and mechanical requirements have heavily influenced the form and proportions of Super 3. This is most notable in the cast aluminium structures that provide the face of the vehicle, brace the engine and control the corner packages, while also directing air into the side-mounted cooling packs.

Super 3 is Morgan’s first clean-sheet design since the launch of the Aero 8 in 2000 and the company’s biggest visual departure since the 1962 Plus 4 Plus. Super 3 challenges the typical perceptions of Morgan design yet remains true to the company’s underlying principles and heritage.

The exact positioning of the engine – now car-derived and mounted in-board – within Super 3 is of crucial importance. Chosen in part due to its compact nature, the inline three-cylinder block sits precisely behind the front axle line, delivering optimum weight distribution and desirable proportion. The latter is a key principle for Morgan’s designers, who determine it vital that the body of the car is visually towed by its front wheels rather than sat on top of them. Super 3 has a mechanically intricate front end and exhibits linear geometry, which is intentionally contrasted against the trailing aerodynamic passenger compartment.

Honesty of design is one of Morgan’s key principles, and Super 3 embodies this wherever you look. Every feature – no matter how superficial it may appear – has an underlying mechanical purpose: the vehicle celebrates the marriage of design and engineering. Examples of this are prominent throughout Super 3. Features such as the metallic impressions in the footwell side panels, which stiffen the surface but are exposed as a design feature. Everything is honest, with reason.

The engine resides beneath the nose cone, which is positioned deliberately to deliver both optimal weight distribution and desirable proportion. This visual mass sits directly behind the centre line of the front wheels and is a principle proportion of Super 3. Beneath the cowl, the engine is visible through a mesh with its moving mechanical components clear to see.

Bracing the engine are structural aluminium castings finished in silver or black. These castings support the engine and corner packages while also ducting air into the cooling packs. The mechanical requirements of these castings have delivered the character of Super 3’s face and have become a crucial design element.

All of the elements of Super 3’s wishbones, pull-rod suspension and headlight structure have been shaped to assist airflow to the radiators behind them, and the mechanical complexity is reminiscent of that of early-century three-wheeled Morgans. The headlight stalks themselves are structural, acting as an additional brace between the upper and lower wishbone pick-up points, while continuing to reflect the vehicle’s trihedral theme.

As well as providing an aerodynamic advantage, the pull-rod suspension brings dynamic benefits by reducing unsprung weight. In parallel with the shape of the front casting, it facilitates a free flow of air towards the side-mounted radiator packs. Visually, the setup reduces clutter and is yet another example of form and function being one and the same.

The engine mount strategy is unique to Super 3. Specifically, the Hartland Strut – named after the Morgan engineer that designed it – is the foremost mount and integral to the face of the car, while managing the torque reaction of the engine.

The front wheel design is by Morgan. The wheels’ positive offset allows for the longest possible suspension wishbones, with the brakes mounted far out. This maximises ride quality, handling and stability. The inside face of the wheel arches is closed-off, which works aerodynamically both to reduce wind noise and to help the flow of cooling air to the radiators behind them.

While the front end embodies mechanical honesty, the tail contrasts this with elegant, streamlined simplicity. An exposed rib forms a beltline around the vertical midpoint of the vehicle. This feature is a nod to traditional seam joining techniques deployed on mid-century aircraft fuselages, and it is often apparent in ‘belly tank’ racers and early jets. Beneath it lies a unique cut-off tailpipe design, a feature that would normally be impossible but which meets regulations due to its positioning inbound of this beltline.

A casting at the rear apex of Super 3 mirrors the texture and functional prowess of the front castings. Primarily, the rear casting clamps the two sides of the monocoque structure together. However, it also houses the fog and reverse lights, provides a base for the number plate mount and obscures the all-important pressure relief venting for the rear wheel well. Furthermore, the rear casting integrates a hinge for the rear boot lid and optional luggage rack, and it allows this accessory to be lifted independently or in unison with the boot. Underneath the rear clamshell boot is an enclosure sculpted to provide maximum luggage capacity.

The interior of Super 3 has – necessarily, given its adventure credentials – been designed for resilience. Rated at an approved ingress protection level of IP64, any part of the interior is completely dust-tight and protected against water splashing from any direction, even down to the integrated USB sockets.

The minimalist dashboard features Morgan’s traditional centre-mounted dials, but for the first time in a Morgan they are fully digital. Their surrounds – available in both anodised black or silver finishes – are formed from metal, just like any touchpoint in the cabin, and are cold to the touch, giving a material authenticity. The engine start/stop button, inspired by the ‘missile release’ button on military aircraft, is carried over from the outgoing model.

A choice of seat materials includes vinyl, water-resistant leather, saddle leather with enhanced durability and a technical fabric that combines a high level of water resistance, UV resistance and ease of maintenance and which offers an appealing alternative to leather.

Available for the first time is a footwell heater, making Super 3 even more suitable for adventure, while comfort is further enhanced by a reach- and rake-adjustable steering wheel and a quick-release adjustable pedal box.

A universal fixing – the same as the ones mounted to the vehicle sideblades – is mounted under the dashboard and allows for a cup holder or Quad Lock phone mount to be fitted. Bungee cords can be fitted to the chassis impressions in the outer cockpit to provide a quick storage solution for coats, maps and small bags, while a discreet lockable underseat compartment allows more valuable items to be stored.

Available to order now, Super 3 is priced from £41,995 in the UK, with customer deliveries starting in June 2022 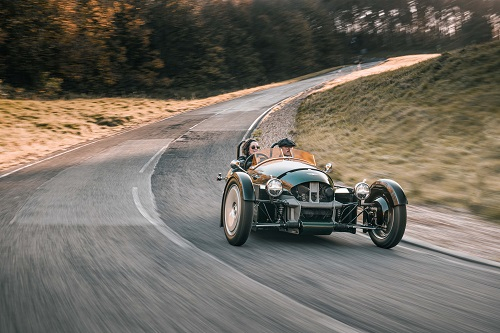 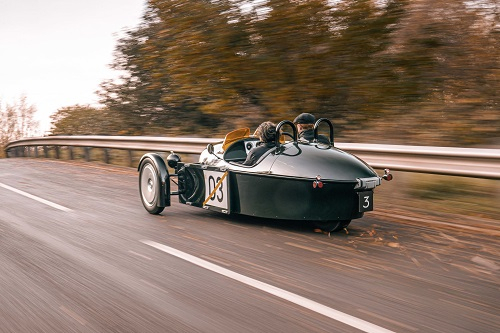 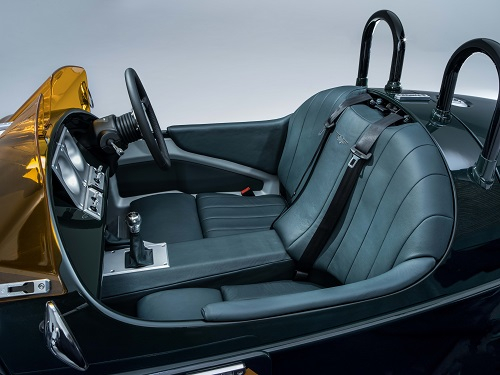