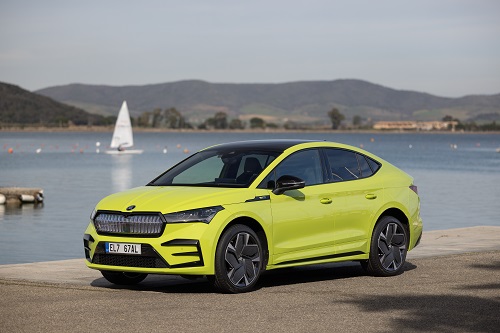 The new ŠKODA ENYAQ Coupé iV makes a statement with its dynamic looks and sporty, elegant lines. It complements the multi award-winning ŠKODA ENYAQ iV, adding an even more emotive variant to the range. The ENYAQ Coupé iV vRS also marks the debut of the brand’s first all-electric member of the sporty vRS family. While the roofline gently slopes towards the rear from the B-pillar, the new coupé offers plenty of space in the rear and a boot capacity of 570 l. Just like in the ENYAQ iV, the classic trim levels for the interior have been replaced with the Design Selections. There is a choice of rear- or all-wheel drive, and two power variants with outputs of 204* and 299 PS (vRS variant). The outstanding drag coefficient (cd) of 0.234 is even better than that of the ENYAQ iV and, depending on the specification, enables a range of more than 335 miles*** in the WLTP cycle.

Following the successful launch of the all-electric ENYAQ iV SUV, ŠKODA is expanding its first model range based on Volkswagen Group’s MEB modular electric car platform to include the ENYAQ Coupé iV. Both variants roll off the production line at ŠKODA’s main plant in Mladá Boleslav, making them the only MEB-based models within the Volkswagen Group in Europe to be manufactured outside of Germany.

At first glance, the dynamically designed, four-door coupé is characterised by a roofline that gently slopes towards the rear from the B-pillar, merging with the tailgate that features a sharp trailing edge. The vehicle’s lines are further accentuated by a dark tinted panoramic glass roof, which comes as standard. It spans the entire roof and is the largest in the current ŠKODA portfolio. From the side, alloy wheels measuring between 19 and 21 inches and body-coloured side skirts emphasise the car’s sleek appearance. A sporty front apron provides another unique touch. In addition to the SportLine variant, the new coupé is also available as a vRS model, which makes it the first all-electric member of the vRS family from ŠKODA. This variant features the Crystal Face as standard – with 131 LEDs illuminating the ŠKODA grille’s vertical ribs and horizontal light strip. In terms of powertrain, two electric motors provide all-wheel drive and a system output of 299 PS**, enabling a particularly dynamic driving experience and a top speed of 111 mph – 12 mph more than any other ENYAQ iV model.

There is a choice of two powertrain variants for the ENYAQ Coupé iV. Power output starts at 204 PS* with the rear-wheel-drive ENYAQ Coupé iV 80, which is equipped with an 82-kWh battery (net: 77 kWh). The ENYAQ Coupé iV vRS, uses a second motor on the front axle to provide all-wheel drive and produces 299 PS. Thanks to its outstanding aerodynamics and a drag coefficient (cd) of 0.234, the new coupé is even more efficient than the excellent ENYAQ iV. Depending on the specification, the ENYAQ COUPÉ iV 80 boasts a range of more than 335 miles*** in the WLTP cycle.

Due to its composition and long wheelbase, the MEB platform opens up new possibilities regarding body proportions and design. As the voltage battery is fully incorporated in the underbody and electric vehicles don’t have a transmission tunnel, the space available for rear-seat passengers is also particularly generous. The ENYAQ Coupé iV’s boot measures a spacious 570 l. The interior is defined by the Design Selections which are inspired by modern living environments and use natural, sustainably processed and recycled materials, same as in the ENYAQ iV. The clear structure of the options available with packs arranged by ten themes and select individual choices mean the car can be configured in just six steps. Key vehicle functions can be operated intuitively using the 13-inch central infotainment screen. The 5.3-inch Digital Cockpit, which can be supplemented by a head-up display with augmented reality, allows the driver to keep an eye on the most important driving data and information on the vehicle status at all times.

The new ŠKODA ENYAQ Coupé iV is even more dynamic and sporty than the ENYAQ iV SUV variant. From the B-pillar, the roofline gently slopes to merge with the car’s stunning rear, featuring a trailing edge. The body-coloured side skirts and the black panoramic glass roof, which comes as standard, create distinctive visual highlights. The range-topping ENYAQ Coupé iV vRS sports black design features and the vRS-typical red reflector strip at the rear. This variant also comes with the Crystal Face as standard, which illuminates the striking ŠKODA grille with 131 LEDs.

The new ENYAQ Coupé iV is 4,653 mm long, 1,879 mm wide and 1,622 mm high. Its wheelbase measures a generous 2,765 mm and appears even longer than it actually is due to the body-coloured side skirts (another standard feature). Large alloy wheels with diameters ranging from 19 to 21 inches underscore the car’s athletic lines. A distinct front apron sets the ŠKODA ENYAQ Coupé iV apart from the ENYAQ iV. The black panoramic glass roof, which comes as standard, spans the entire roof and slopes gently towards the rear from the B-pillar to merge seamlessly with the sharp trailing edge of the car’s striking rear. With the largest glass roof in any ŠKODA, the incoming light makes the interior feel airy and as it is thinner than a full roof, it provides passengers with plenty of headroom. Its special coating means the temperature inside remains pleasant at all times. Another striking feature is the ‘ŠKODA’ block lettering on the tailgate. The chrome trim on the window frames and the chrome surround of the ŠKODA grille provide a stylish contrast. There is a choice of two standard colours and seven metallic paintwork options for the ENYAQ Coupé iV. Metallic Phoenix Orange and metallic Graphite Grey, which has replaced ŠKODA’s metallic Quartz Grey, make their ENYAQ iV debut. The striking Hyper Green finish is exclusive to the ENYAQ Coupé iV vRS. 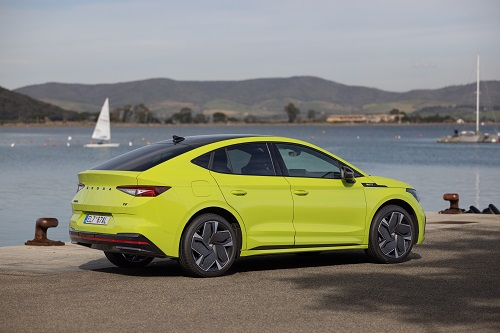 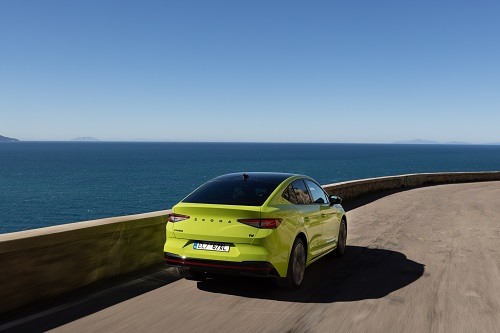 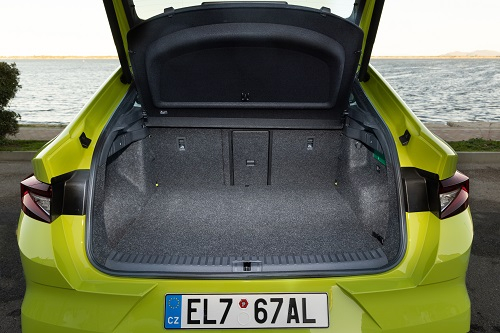 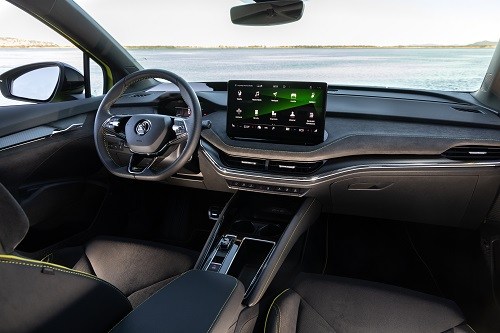 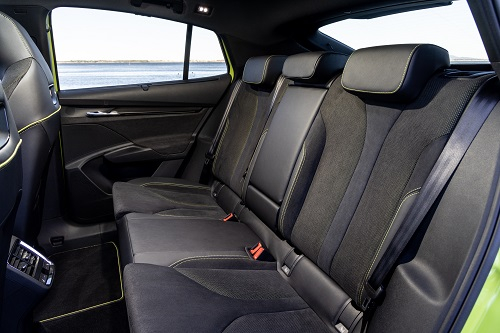 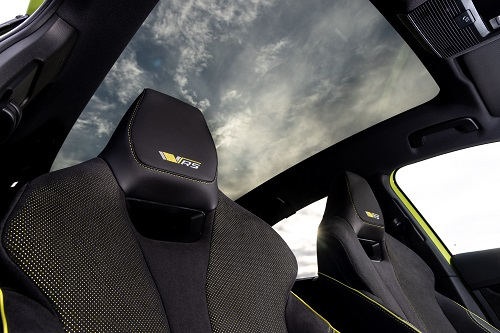