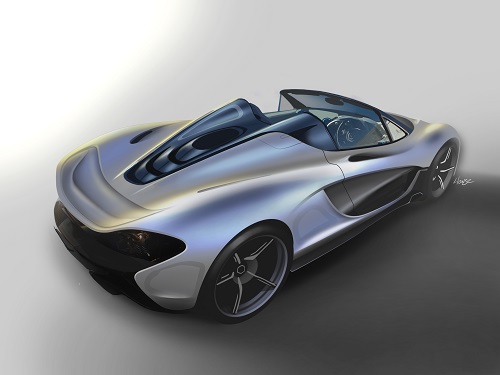 As the centrepiece to the new Lanzante show stand at the Goodwood Festival of Speed, Lanzante has pulled the covers off its latest bespoke commission. The ultra-exclusive open-top P1 Spider.

When launched, nearly 10 years ago, the P1 was the first of the new breed of groudbreaking hypercars. With a shrink-wrapped design and hybrid powertrain, it rewrote the rule book, delivering blistering performance and lap records on every continent. The new P1 Spider retains all the drama and visceral excitement served up by the coupe, from which is converted, but now with the added engagement only offered by open-top driving.

To ensure the removal of the roof was handled sympathetically and none of the visual drama of the coupe was lost, Lanzante turned to the man who knows every line and angle of the car better than anyone; Paul Howse. Paul was responsible for the design of the original coupe, and he has worked closely with the Lanzante team to keep the design of the new commission as close to the iconic original as possible.

“The original concept was one of organic fluidity, layering, and of a beautiful skin wrapped over the technical carbon components. A visual story of the airflow,” explains Paul. “With the P1 Spider, we wanted to continue and accentuate this theme. The design has some subtle tweaks, and the body now flows from the bonnet edge around the A-pillar into the waistline, kicking up behind the driver, echoing the bodyside. This creates a floating fin to direct air into the engine, and then flows back down into the rear deck. The carbon buttresses cocoon the driver and echo the beautiful clean lines of the coupe’s tapered cabin.

“The rear deck design had to perform the same function as the coupe, so we have retained the layered gills to direct cool air over the exhaust and then evacuated at the back. In a change to the coupe, the engine now more exposed and visible through the carbon panel.”

The removal of the roof section, with the central ‘snorkel’ air intake and glass roof panels, has been an engineering challenge to the team. It has seen subtle changes made to the front wings, doors, and rear ‘clamshell’ engine cover. The new flowing lines now see the carbon fibre chassis blend with the new aerodynamic buttresses which incorporate newly positioned air intakes, feeding air directly into the turbochargers. Beyond this, the lower section of the chassis has been reengineered to ensure no loss in structural rigidity, despite the lack of roof.

With the cabin now opened to the elements, Lanzante has updated the interior of the P1 Spider, offering occupants increased levels of luxury with newly upholstered seats. Should the driver be caught out while the removable roof cover is removed, the use of leather and durable SuperFabric® provides resistance to weather and UV exposure. The bold interior enhancements on the showcar contrast with the satin carbon fibre finished interior and gloss black switchgear.