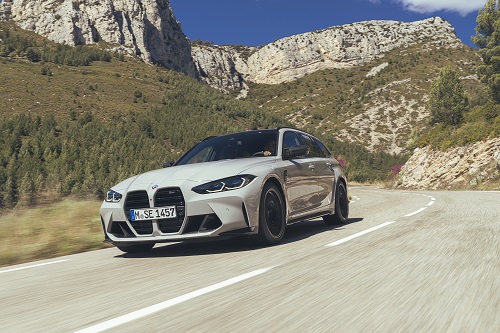 The BMW M3 model family is welcoming a Touring addition to the ranks for the first time, offering an intoxicating blend of exhilarating performance and practicality.

Offered exclusively in Competition guise with the M xDrive all-wheel-drive system, the BMW M3 Touring combines that race-car feeling with a distinctive character and immense versatility.

Power generated by the 510hp six-cylinder in-line engine with M TwinPower Turbo technology is channelled via the eight-speed M Steptronic transmission with Drivelogic and split between the four wheels as required. As a result, the BMW M3 Touring delivers blistering performance at all times both on the road and on the track. Agility and precision in the familiar BMW M tradition combine with unrestricted everyday practicality to give the BMW M3 Touring a distinctive identity showcased by its exterior design.

Its M-specific front end ensures the Touring is immediately recognisable as a member of the M3 family. At its centre is the vertical black frameless BMW kidney grille dropping down towards the road, its horizontally arranged M-typical double bars carrying a “M3 Competition” badge. The large intakes positioned in the lower section of the front apron optimise the supply of air to the drive components and braking system. The apertures are each split into two sections and have honeycomb mesh covers.

When viewed from the side, the distinctive proportions of the Touring blend with its flared wheel arches, characteristic M gills and extended side skirts. Together with the attachment parts for the front and rear aprons, the sills form a Black high-gloss band around the car. This racing-inspired body element teams up with the front spoiler lip, aero flics for the air curtains and brace covers in the underbody area to enhance the car’s aerodynamic balance. The exterior mirrors in M-specific design with a Black high-gloss finish also optimise airflow.

Full-LED headlights with U-shaped fibre-optic light guides for the daytime driving lights are standard for the BMW M3 Touring, as are BMW Individual lights Shadow Line with darkened inlays adorning their upper edges. The optional BMW Laserlight available as part of the Visibility package can be identified by the blue inlays inside the headlight units. It includes the cornering light and adaptive cornering functions with variable road illumination optimised for urban and motorway driving, plus the BMW Selective Beam non-dazzling High-beam Assistant. At speeds above 37mph, BMW Laserlight increases high-beam range to a maximum 550 metres and follows the course of the road dynamically. 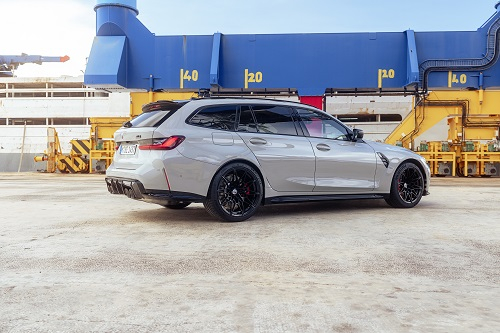 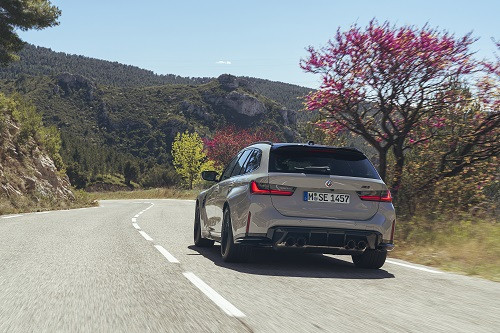 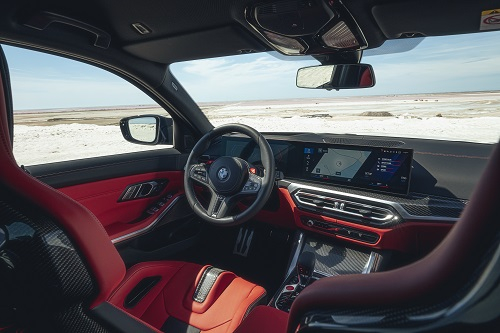 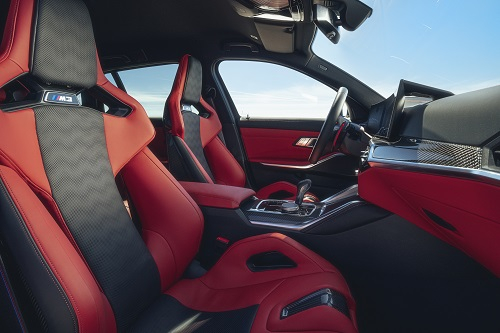 The BMW M3 Touring is 85mm longer externally than the BMW 3 Series Touring at 4,794mm, 76mm wider (1,903mm) and 4mm lower (1,436mm). It also has particularly large light-alloy wheels – 19-inch at the front, 20-inch at the rear – in double-spoke design as standard in Jet Black or optionally in bi-colour diamond polished finish. M forged wheels with a double-spoke design can also be specified as an option in either bi-colour Jet Black or Orbit Grey matt. Special track tyres are also available as an option.

The cockpit design combines with M-specific design features including red colour accents for the M buttons on the M leather steering wheel and the Start/Stop button on the centre console. The gear selector lever with Drivelogic switch has a leather surface with embedded M logo and stitching in BMW M GmbH colours. It also features an eye-catching cut-out with integrated cascade lighting. An anthracite-coloured BMW M headliner and interior trim strips in Carbon Fibre high-gloss are standard.

The Merino leather-trimmed M Sport seats fitted as standard in the front of the BMW M3 Touring include multi-way electric adjustment with a memory function, and are also heated. M seat belts with a woven stripe pattern in BMW M GmbH colours are also included.

he BMW M3 Touring is priced from £80,550 RRP with orders open at BMW retailers now. The highly anticipated M model will celebrate its global premiere at the Goodwood Festival of Speed on Thursday 23 June.