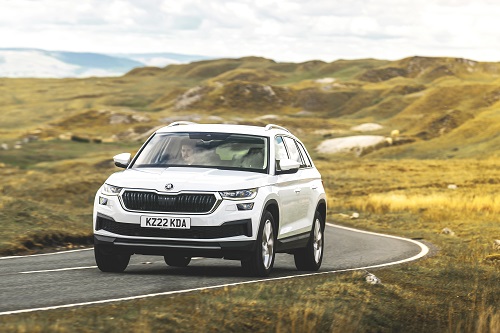 UK new car registrations fell -24.3% in June, according to the latest figures released today by the Society of Motor Manufacturers and Traders.

Battery electric vehicles (BEVs) continued their growth streak, however, with a 14.6% increase in volume, as market share continued to grow, reaching 16.1%, up from 10.7% a year before. Conversely, plug-in hybrid vehicle (PHEV) uptake fell by 4,425 units to take a 5.5% market share. In total, plug-in vehicles comprised more than a fifth (21.6%) of new cars joining the road in the month. All other powertrains saw declines in registration volumes and market share apart from hybrid electric vehicles (HEVs), which, despite a 1,172 unit fall, increased their market share to 10.6%.
Declines were most significant in large fleets, which recorded a -27.6% fall in registrations, while private consumer volumes dropped by a more modest -21.7%. As a result, the fleet and business share of the market reduced to 50.7% as manufacturers prioritised private consumers in the supply-constrained environment.
Given the ongoing shortages of essential components, exacerbated by pandemic restrictions in China, global vehicle production has struggled to keep up with demand throughout 2022. New car registrations for the year to date have fallen by -11.9% to 802,079 units – the weakest first half year performance since 1992, bar 2020.1 Some 107,894 fewer new cars have been registered during the first half of 2022 compared with the same period last year – despite 2021 demand being restricted by dealership lockdowns until April, with consumers only able to buy vehicles through click and collect.

More positively, electric vehicle market share continues to grow. Plug-ins account for a record one in five new car registrations year to date, demonstrating manufacturers’ commitments to deliver the latest zero emission capable vehicles. The pace of this growth, however, is decelerating, with registrations up by 26.0% in the first half of 2022, compared with growth of 161.3% during the first half of 2021.

While growth rates were expected to moderate as the market begins to establish, the slowdown is more than had been anticipated, leaving the market behind the industry’s outlook.3 Part of this fall is attributable to the continuing supply chain shortages that are hampering production of all models, but the scrappage of the plug-in car grant means the UK is now the only major European market without purchase incentives for private EV buyers.

“Electric vehicle demand continues to be the one bright spot, as more electric cars than ever take to the road, but while this growth is welcome it is not yet enough to offset weak overall volumes, which has huge implications for fleet renewal and our ability to meet overall carbon reduction targets.

“With motorists facing rising fuel costs, however, the switch to an electric car makes ever more sense and the industry is working hard to improve supply and prioritise deliveries of these new technologies given the savings they can afford drivers.

Looking ahead, James Fairclough, CEO of AA Cars, said, “If the first half of 2022 has been haunted by the spectre of poor supply, the question for the second half of the year is how Britain’s slowing economy will impact demand.

“Thus far drivers’ desire for new cars has held up well, but it may cool as the cost of living crisis bites deeper and more consumers opt to postpone big ticket purchases.
“The quest for better value has led many prospective buyers to switch their focus to the second-hand market, and many dealers report that sales of used vehicles are outpacing those of brand new models.

“In the current fragile market, used cars have a clear advantage over their brand new rivals – availability. We’ve seen this first-hand on the AA Cars website, with many would-be buyers using our platform to shop for a used vehicle that’s available to drive away today.

“While strong demand has pushed up second-hand prices, there are some competitive used deals to be had, particularly for buyers who do their research and consider searching outside their local area.”

The SMMT’s data on new car registrations, shows that electric car sales are around 16%, putting the UK close to the government’s target two years early.

Environmental group Transport & Environment has called on the government to increase its ZEV mandate – a UK Government drive to force car makers to sell a fixed percentage of electric cars as part of their overall production by 2030 – to 34% in 2024. The target is currently 22%.

Matt Finch, UK director at T&E, “Electric car sales are soaring. In the next few months, sales of EVs are set to eclipse the government’s target two years early.

“This gives carmakers a free pass for years. If the government wants to be a climate leader, it should raise its ZEV mandate target to at least a third of new sales in 2024.” By Robin Roberts Miles Better News Agency.