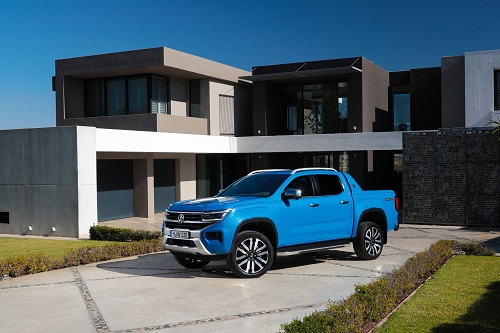 Volkswagen Commercial Vehicles presents the world premiere of the new Amarok. The on- and off-road all-rounder has been designed and conceived in Germany and Australia; it is being produced in South Africa. A premium pick-up for Australia and New Zealand, numerous countries of Africa, the Middle East and Europe.

Charismatically designed, cleverly conceived. Its well thought-out set of features, over 20 new driver assist systems, mobile online services, engines that are both efficient and high-torque, two all-wheel drive technologies, tailor-made accessories and clear Volkswagen design DNA make the new Amarok one of the most versatile and well-balanced pick-ups in the world. Slogan: ‘No matter what’. The premium pick-up will come onto the market in the first few countries from the end of the year.

Everything is new. But the Volkswagen design makes it immediately clear: this is an Amarok. It has become bigger, more powerful, more athletic and more charismatic. “For the new generation we have significantly modified the Amarok’s archetypal design. It is now unambiguously more expressive and even more impressive”, says Albert Kirzinger, Head of Design at Volkswagen Commercial Vehicles. Making a statement in itself is the new front section of the pick-up, which is launching in the specification variants ‘Amarok’, ‘Life’ and ‘Style’, as well as the top versions ‘PanAmericana’ (off-road styling) and ‘Aventura’ (exclusive styling). Striking: the straight and very upright bonnet with unambiguous Volkswagen DNA. The same applies to the bars running horizontally across the radiator grille with the concisely integrated LED headlights, which come as standard on all versions. On the Amarok PanAmericana, Aventura and Style the headlights used will be ‘IQ.Light – LED matrix headlights’ which interactively light up the road as bright as day and have an unmistakable light design. Below the transverse bars, the radiator grille unit merges depending on version into a further horizontal level of the front section or – in the case of the PanAmericana and Aventura – into an X-shaped design. Embossed above the number plate holder is the word ‘Amarok’.

The new Amarok is being launched with a four-door double cab (DoubleCab) and two-door single cab (SingleCab). In silhouette the wheel arches, which are half-round as before, are especially striking on both versions. In contrast to many other pick-ups the upper termination of the wheel arches forms a practically straight rather than a circular line – a typical Amarok design feature. The wings above the up to 21-inch alloy wheels have a powerful look and around the wheel arches are clad with robust plastic. The shape of the panels creates a look of the Amarok slightly flexing its muscles. The new pick-up is striking from the back too. Beneath the large VW symbol the word ‘Amarok’ is embossed across almost the entire width of the tailgate.

The outer frame of the rear section is formed by the C-shaped tail lights, which reach far into the silhouette. On the PanAmericana and Aventura versions they too use LED technology. 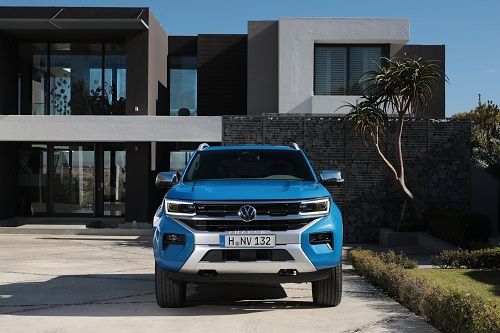 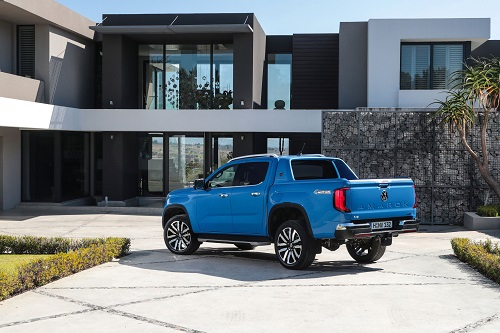 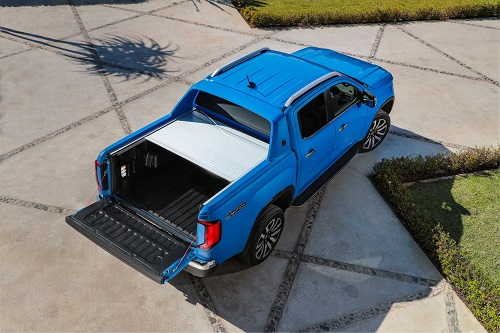 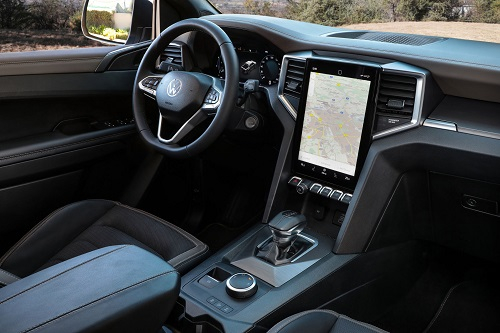 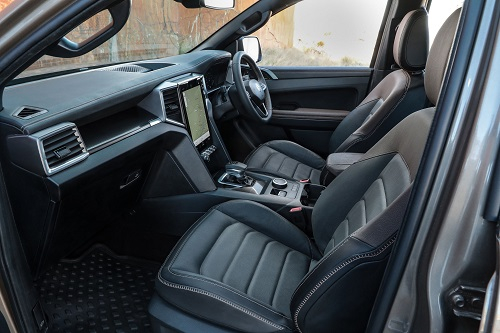 At 5,350 millimetres, the new Amarok is 96 mm longer than its predecessor. A wheelbase of 3,270 mm represents an increase of 173 mm. That provides more room, especially on the double cab’s second row of seats. The wheelbase has thus grown much more than the total length. And that shortens the body overhangs. The result: sharper proportions and improved off-road capability thanks to better approach angles. The off-road capabilities of the Amarok, which will have all-wheel drive as standard in many markets, are also enhanced by much greater fording depth for driving through watery terrain. Previously it was 500 mm, now it’s 800 mm.

It is also strikingly spacious behind the double or single cab: in what is known as the cargo box. As was the case on the predecessor model, the cargo bed between the wheel arches has enough room for a Euro pallet loaded in sideways. The single cab version can even take two pallets loaded in sideways. The load is strapped down via eye rings on the cargo bed, which can each take a load of up to 500 kilograms. In line with this high load capability, the maximum payload has gone up from a good tonne to now 1.16 tonnes. The cargo box can also be secured using an electrically operated roll cover. This roll cover can be opened and closed from the cargo box itself, from inside the vehicle or by remote control via the vehicle key.

Four turbo diesel (TDI) engines and one turbocharged petrol (TSI) engine have been developed for the new Amarok. Qualities common to all five engines are efficiency and high levels of torque. On the African market, for instance, it is the base specification engine that is being used: a four- cylinder, 2.0-litre TDI delivering 110 kW (150 PS). In terms of power output the next engine for many markets of the world is a 2.0-litre four-cylinder TDI delivering 125 kW (170 PS). As the third level, Volkswagen Commercial Vehicles will be offering a four-cylinder TDI engine with 2.0 litres of cubic capacity and bi-turbocharging; it develops 150 kW (204 PS) or 154 kW (209 PS) dependent on the market. The engine used as the new top TDI is a 3.0- litre V6. It provides power output of 177 kW (241 PS) or 184 kW (250 PS) dependent on the market. A 222 kW (302 PS) 2.3-litre turbocharged petrol engine has also been designed specifically for the traditional petrol engine markets.

The Volkswagen’s design makes it immediately clear: this is an Amarok. And yet every millimetre of the pick-up has been rethought, redefined and redesigned. The dimensions alone already show that the all-rounder has been significantly further developed: at 5,350, the new Amarok is 96 mm longer than the predecessor model. A wheelbase of 3,270 mm also equates to an increase of 173 mm. That provides more space. As the new Amarok’s wheelbase has grown more than the pick-up’s total length, the body overhangs are now shorter. The new model is 1,910 mm wide, including wing mirrors it’s 2,204 mm. Compared to the predecessor generation the usable body width has increased. Dependent on wheel/tyre combination, the Amarok’s height is up to 1,888 mm.

Off-road capability has also been improved. The fording depth for driving through water, for example, has increased from 500 to 800 mm. Thanks to the now shorter bodywork overhangs, the off-road qualities have also been improved by optimised approach angles: for the front angle of approach the figure is 29 degrees and for the back 21 degrees. The ramp angle between the axles is also exactly 21 degrees.

Volkswagen Commercial Vehicles has given the new Amarok an interior concept that is both systematically functional and high in quality. The features include digital 8.0-inch instruments (‘Digital Cockpit’, fully digital and 12.0-inch in size on the Style and above) and a highly modern infotainment system with a display in tablet format (10.0-inch screen as standard, 12-inch on the Style and above). Always included in the systems: Android Auto (Google) and CarPlay (Apple) for integrating smart phone apps into the infotainment system, mobile Volkswagen online services and two USB ports. Typical of Volkswagen Commercial Vehicles: the self-explanatory controls – from the standard specification Volkswagen multifunction steering wheel all the way to the Keyless Access lock and ignition system or the electric parking brake for the all-wheel drive versions (Life and above). Also fitted as standard in the Amarok PanAmericana and Aventura is a high- end sound system from Harman Kardon.

In fact, Volkswagen Commercial Vehicles is using a mix of digital functions and ergonomically configured buttons and/or push/rotary switches in the Amarok that are especially intuitive to use. The infotainment system’s volume and all-wheel drive’s settings are, for instance, controlled via such hard keys. On the higher specification models these both robust and premium-looking features are all framed in aluminium. The seat system has also been completely redesigned. It provides passengers with the customary Volkswagen comfort; in the top versions the seats feature electric, 10-way adjustment. The back of the double-cab Amarok also offers plenty of space and comfort for three adult passengers to enjoy the journey.