The electric car market is on a charge. Evermore new models are coming to join an ever growing market place and their numbers are expected to swell very quickly once the coronavirus lockdown ends and some semblance of normality returns to showrooms.

So it was interesting to study the results of a valuation survey compiled by Vanrama which looked at the current crop of cars and how they hold onto prices over different durations, typically what buyers have been working on for several years.

There are some fascinating, even eye-opening as well as eye-watering, figures to swallow, even for well established brands.

The depreciation of electric cars over 5,000 miles

It’s no surprise to see Audi, Jaguar and Tesla in the top spots, with the e-tron, I-PACE and Model X, respectively in the top 3 places.

Another wild card is the Hyundai Ioniq Electric, which also finds itself at the more wallet-friendly end of the table, with a drop of only 17% after 5,000 miles. That’s good enough to have it brushing shoulders with Tesla’s Model S, a model that’s more than twice as costly.

However, add another 95,000 miles to the clock and the story dramatically changes.

The depreciation of electric cars over 100,000 miles

The I-PACE’s strong start is undone here, shedding almost half of its £70k-plus price tag and putting it on par with the Nissan LEAF.

At the other end, the e-Up is again punching above its weight in 4th place and with a drop of only 39% on its base value. At little over £23k, it’s the cheapest on the list and steadily holds value..

To give a balanced view the study also looked at the comparable internal combustion engined models and hybrids from the manufacturers and that made interesting reading.

After 100,000 miles, it’s the F-PACE that fairs best against its battery-powered sibling, losing 44% of its base price – five percent shy of the I-PACE. You’ll also pay around £30k less for the privilege; another win.

Despite being the cheapest model looked at, the VW Up! seems to come off worst. But, for a model that starts at £13k, the losses aren’t as hefty, pound for pound. By Robin Roberts Miles Better New Agency 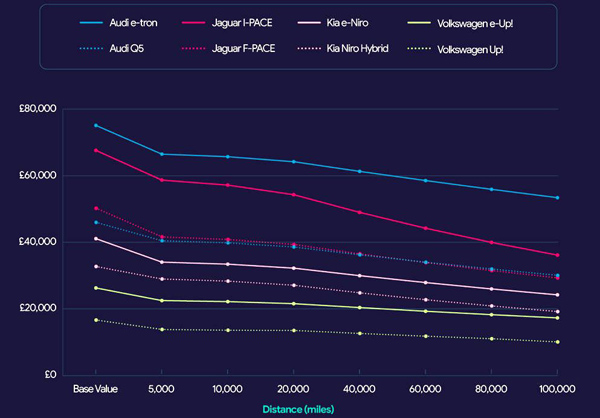