The biggest story is the release of the list of teams and entries; 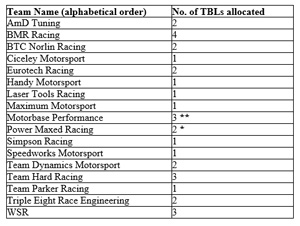 * TBLs on loan from TOCA

** One TBL on loan from Welch Motorsport

Alan Gow also issued a clarification saying that no team changes will be permitted to this list now that the entry deadline has passed and the 50% deposits have been received. In 2016, several TBL’s changed hands after the list was issued and the final entry list looked very different but it seems that TOCA are determined that this does not happen before the 2017 season.

As can be seen from the list, Welch Motorsport have lent their entry to Motorbase and so it can be assumed the team won’tbe racing. BTC Racing return, with rumours suggesting they will run the two former Power Maxed Chevrolet Cruzes. Also BKR are no longer entered with their VW CC’s having gone to Team Hard.

Team Hard have also recently announced the second of their three 2017 drivers. After announcing Will Burns a few weeks ago, Michael Epps was announced as their second driver, returning after driving for them in 2016.

“You know, I was a little concerned about being a one season wonder in the BTCC, especially being such a tough season, but I’m glad I was able to make an impression and create a 2017 campaign out of it,” said Epps.

“Tony [Gilham] has essentially opened the door for me to race in a championship I once never really considered as a possibility. Now we are set for year number two and I think we have a good chance to make a real impact.

“As anyone would expect, with a small budget and as part of one of the younger teams on the grid in my rookie season, there have been many challenges and I’m expecting there to be plenty more ahead too. The ingredients are there though; with the new cars and more people on-board I think we should be properly in the mix this time. We definitely outdid our equipment this year.”

“The deal is the right one for us at the end of the day. The team are passionate, they’re loud, and they want success. I have a great relationship with them and I think we’ve got what it takes, this will be the first time I’ve done a second season in any championship too.”

Gillham is pleased to have Epps back; “We are very proud to have been able to put a package together to retain Mike for 2017. It is important for us to try to keep as much consistency with the team as possible and we have a great foundation on which to build on. He had a great season and we believe that next year will be very interesting to see how far up the grid Mike can get. His pace was outstanding last year and got nowhere near enough credit for his consistent front running lap times each weekend.”

AMD Tuning, who have already announced they are running Ollie Jackson once again, chose the release of the entry list to confirm they’ll be running a second Audi for an as yet unnamed driver.

“We made no secret of our desire to run a second car next year and are delighted that we’ve been able to conclude a deal to acquire the TBL that we needed,” team boss Shaun Hollamby said.

“As ever at this time of year, there was a lot of interest in people who wanted to run additional cars and the fact that there will be a second Audi for the full season is an indication of our desire to take our BTCC programme to the next level.

“Having already agreed a deal to re-sign Ollie last month, we’ve had a lot of interest in the second seat and are in talks with several drivers about joining us for 2017.

“Given the calibre of the those drivers and the fact that we have a very competitive package in the Audi, we are confident that we’ll be able to field a driver pairing that will give us the best possible opportunity to build on the progress we made throughout 2016.

“Alongside our new sportscar programme [The team will run a Mercedes AMG GT3 in both British GT and Europe], there is no doubt that 2017 will be the biggest season to date for AmDTuning.com as a team, and everyone involved with the programme can’t wait to get started.”

Motorbase have also announced expansion, to three cars after getting hold of Welch Motorsport’s licence. They are cutting their Sportscar programme to concentrate on the BTCC alone. Team Boss Dave Bartrum explains all;

“The 2016 season was a great year for Motorbase Performance taking both the Independent Teams and Drivers trophies, but we’re ready to step it up a gear in 2017. These are really exciting times for Motorbase. We have a fantastic new title sponsor behind us as well as the backing of some of our long-standing partners and this has enabled us to push forward our plans to bring the third Focus out on track for our 2017 campaign.”

“We’ve shown that we have one of the best packages on the grid this year and with some tweaks over the Winter, we expect the Focus to be back up there competing at the front again in 2017;” added Bartrum. “We’re talking to some great drivers at the moment and we’re working hard on putting together a title-winning squad for the new season.”

“We’ve enjoyed five fantastic years racing in the GT world – taking both the overall Driver and Team Championship crowns in the British GT Championship and podiums in the Blancpain Endurance Cup and Gulf 12 Hours;” explained Bartrum. “We’ve raced with and against some great people in that time and it’s by no means the end of sports car racing for Motorbase, but I feel that it’s the right time for us to regroup and to put all of our efforts into building on last season’s BTCC success. We have a new look for the whole squad and a very exciting programme in place for the season ahead. I look forward to introducing our new title sponsor to the BTCC fans in the coming weeks.”

The last big announcement of the past week was the reveal of the first of the drivers for the Manufacturer backed Power Maxed Racing Astras. The team have signed Senna Proctor, who raced in the clio cup in 2016. The son of former BTCC driver, Mark Proctor, he has finished on the podium in every championship he has raced in during his relatively brief career so far.
Proctor is excited;

“The realisation that I will be lining up on the BTCC grid has not sunk in yet, let alone that I will be racing for a manufacturer,” he said. “For that manufacturer to be Vauxhall is almost too good to be true. I really cannot wait to get behind the wheel of the Power Maxed Racing Vauxhall Astra to perfect my craft in the top flight of British motor sport. This move has probably come a year earlier than planned, but when you are offered an opportunity like this then of course you don’t turn it down. I know I will have to work very hard to gain the respect of my fellow competitors, some of whom are the best touring car drivers in the world. I am under no illusions about the challenge that lies ahead and will approach it with the seriousness it deserves. I have always admired what Power Maxed Racing have achieved, and their technical skill and teamwork fill me with confidence that this will be a long and fruitful partnership.”
Power Maxed Racing boss Adam Weaver is very happy with his new signing;

“I’m so excited to have Senna on-board,” commented Power Maxed Racing Team Principal Adam Weaver. “He caught my attention back in 2015 in Ginetta Juniors. I was impressed by how he excelled against very tough competition, and it’s great to be helping him to realise both his dream and his potential of racing in the BTCC. It’s fantastic to once again be supporting and developing young talent, as we did with Josh Cook in 2015. I think Senna will cope with the added pressure this drive brings as he seems to have a very old head on young shoulders. In Senna, I think we have signed a driver who we can build a long-term relationship with and turn into a future champion. Senna will inject a healthy dose of youth and enthusiasm into the team, and I’m sure both he and our other driver – who will be a more experienced, household name – will keep each other on their toes and continually spur each other on.”